Was this Construction signs warn of zombies – via Scarbrough via Facebook.

What is this, North Korea? It’s like the fans of Survivor, American Idol and Sean Hannity all got together and gave each other Eskimo kisses.

I stand by my Bush III/IPod comparison – now more than ever.

Where it will listen to different music I’m sure. I finally finished it today after about ten weeks of slow construction – I’ve been finishing it for the past 3 weeks in fact.

The majority of the time was spent creating and joining all of the pieces of the top together (about 50 or so). You can’t quite tell in the below photos but the top is all end grain oak, cherry and walnut. The stain melds the colors a bit. 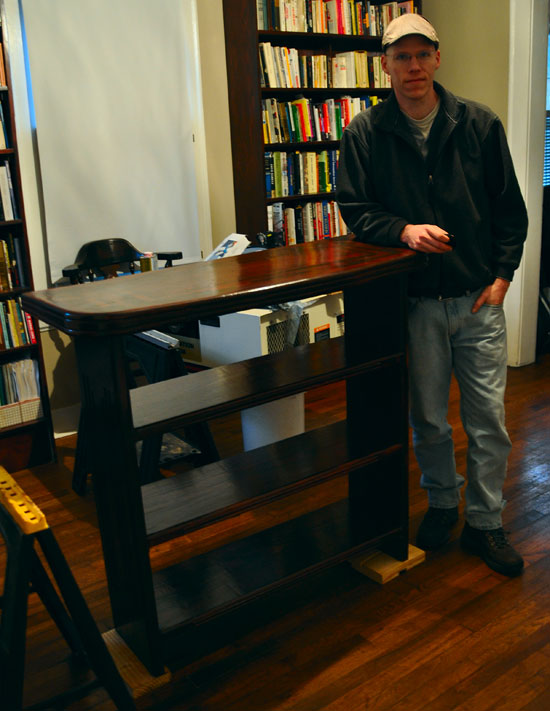 Along with Jazz, white people have also taken quite a shine to The Blues, an art form that captured the pain of the black experience in America. Then, in the 1960s, a bunch of British bands started to play their own version of the music and white people have been loving it ever since. It makes sense considering that the British were the ones who created The Blues in the 17th Century.

From Col. Lang – a very interesting post on the structure of the IDF.

Also, lost in all of the moral analysis of the current mess (why must San Diego always get bombed by Tijuana in analogies?) is how Israel benefits from it’s current engagement. The rocket attacks were bearable for quite some time – and no one goes to war out of principle anymore. The explanation of doing it while Bush is still in office doesn’t seem to be that credible, Obama hasn’t said anything different than Bush 43, and he has something to prove, so I imagine he would be even more agreeable to Israeli action than Bush (and as a reminder, Bush stopped the Israelis from bombing Iran a few months ago).

I suppose the War Nerd’s explanation of the attacks being used to weaken Hamas so Fatah could eventually win their civil war has the most credence, but that has problems too.

Was the War Nerd defining crystal meth as the “Redneck Work Ethic”.

Since I’ve been unswayed by the holidays this year, I’ve watched quite a few movies this year – here’s a partial list

I’m a bit underwhelmed by everything this year.