His back hips had slowly been deteriorating for about a month. I took him into the vet two weeks ago and discovered that he definitely did have arthritis, which German Shepards are very likely to get, and maybe some other more severe hip problems that are difficult to diagnose and not treatable that German Shepards are likely to get as well. The vet put him on a prescription and dietary supplement and we were going to regroup in a month to see how well it worked.

Fast forward one week. The medicine does seem to be helping with the pain somewhat, but it does not seem to be making his hips any better. In fact, his hips continue to deteriorate. What was before just a problem with one leg now seems to be a problem with two legs and he continued to have greater difficulty standing and sitting. There were a few falls too, which never happened before. Also he would drag his back legs sometimes.

Then last Wednesday we start having the power issues, which necessitates us leaving for an AirBNB and then later the apartment. We left Zadoch at the house with a battery powered light – he seemed happy to not have to move and just slept a lot – we added some painkillers to his medical routine and kept up the other medicine.

He then got progressively worse and could only stand with my assistance, or so it seemed anyway – he could drag himself around on just his front legs, but as for walking with his back legs for very far… that was out of the question. He could not lift his back legs up far enough to propel him forward and the top of his feet was pointed toward the ground for some reason (more on that later).

Then came Saturday night – I went over to get him – and take him back to the apartment and he was suffering terribly. His back legs weren’t working at all, but he dragged himself to get in the car with me. I made a judgement call to take him to the apartment so we could spend one more night together and all say goodbye.

At the apartment he felt even worse (though the pain meds did help a bit) He whimpered in obvious pain but once he settled down and realized we were all together I think that made him feel somewhat better. He had good and bad moments throughout the night (I would wake up during his bad ones) and I made the call to take him in that day (Sunday, his normal vet is only open Monday through Saturday). Then I took him into Briarcliff.

I could not have asked for a better vet at Briarcliff Animal Hospital. The vet techs had to help me get him into the clinic (they “wheelbarrow walked” him to the clinic by putting a towel around his midsection and letting him use his front legs – I thought that sounded weird but it worked very well). And then I met with the doctor who was very kind and reassuring. Basically the situation: If there was a fix for the problem then the medication the first vet gave me would have worked, and the only other possibilities were non-fixable. Also, for big dogs, mobility problems are more or less fatal – there is no way they will stay off their feet and they just make a bad situation worse. I think the phrase she used was death sentence. The tops of his feet pointing towards the ground was also indicative of a blood circulation problem.

The procedure went fast and he went peacefully knowing I was there.

We got him on March 15th, 2010, slightly before Staci and I got married and well before Marleigh was born. His name from the original owner (it was a reseller/rescue operation of some kind) was Bam-Bam, but we renamed him Zadoch after an obscure relative of mine. Everything started off well – he was our third dog at that point (Drex was still living and Dagney was just coming off of puppydom). He happily settled in as the Alpha dog, and since he could jump the fence we went on many, many long walks together (averaging about five miles a day the first spring/summer/fall).

He calmed down a little over time and at some point developed the skin allergies that would bother him off and on for his whole life (though less in his later years). When Marleigh was born they became fast friends at even a very young age – he was always hanging around her crib and bed, and she was always drawn towards him. She renamed him Z-Dog when she was two or three – and the name stuck for the rest of his life.

He had some problems with the neighbors dog, jumping the fence at one point to get into a territorial dispute. He would also jump our fence periodically and for some reason jump into cars and wait to be driven somewhere.

We had many happy years of family and dog life – he and Marleigh grew ever closer and he was a constant 100 pound fixture of the house – always with a great happy personality, always great with children – always ready to protect if need be. Life with him was a happy normal.

Zadoch was a great dog and he will be missed. Marleigh has taken it quite hard, and I guess Staci and I have too. I thought we would have several more years with him, but that was not to be. Rest in peace.

In reference to a falling shelf in the refrigerator

Come quick Emma – we have a chance to be Engineers!

Daddy, can you make me a sword?

Marleigh: Daddy – how do you think you’re going to die?

Me: Uhhhhhhhh – of old age I hope

Marleigh: You’ll probably be killed by a monster who hates us, but my love will bring you back (and makes hand gestures indicating casting of spells)

I’m not sure who still reads this at this point, but I did ask the lovely Staci Smith to marry me this evening, and she said yes.

For you detail people, we have not set a date yet, nor a place.

Actually it’s my brother’s in-laws, but anyway, they were recently recognized by the Atlanta Journal Constitution

Mary and Ed Ettel spend most weekends in their basement creating care packages for troops in Iraq, Afghanistan, Somalia and Kosovo/Serbia. In 16 months, they have mailed 376 boxes weighing 5,723 pounds and helping 6,365 service members.

The east Cobb couple and about a dozen volunteers packed 16 boxes Saturday with snacks and hygiene items. During summer mailings, they add baby wipes, salty snacks and water bottles. They also put in Beanie Babies, candy and sometimes soccer balls for soldiers to give to the children they meet.

The Ettels get requests for items through a program called AnySoldier.com. Soldiers post items they need on the Web site and volunteers kick into action.
…

An interesting story on IQ and birth order appeared in the New York Times recently. It makes sense, and jibes with my experience. Money grafs:

The average difference in I.Q. was slight — three points higher in the eldest child than in the closest sibling — but significant, the researchers said. And they said the results made it clear that it was due to family dynamics, not to biological factors like prenatal environment.
…

“Like Darwin’s finches, they are eking out alternative ways of deriving the maximum benefit out of the environment, and not directly competing for the same resources as the eldest,” Dr. Sulloway said. “They are developing diverse interests and expertise that the I.Q. tests do not measure.”

This kind of experimentation might explain evidence that younger siblings often live more adventurous lives than their older brother or sister. They are more likely to participate in dangerous sports than eldest children, and more likely to travel to exotic places, studies find. They tend to be less conventional than firstborns, and some of the most provocative and influential figures in science spent their childhoods in the shadow of an older brother or sister (or two or three or four). 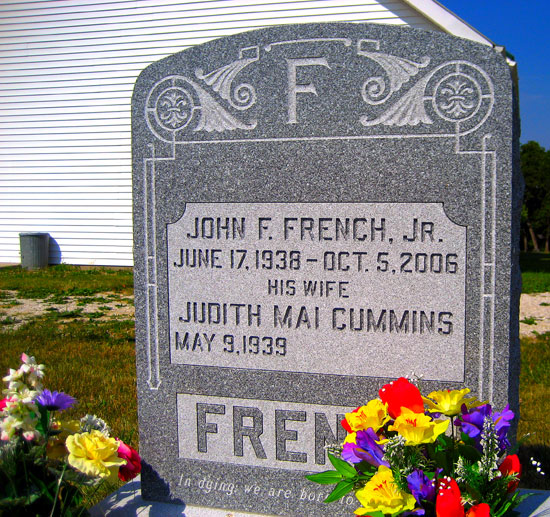 I got back yesterday from the headstone commemoration ceremony. It was good to see everyone, and the headstone is very nice. The stone from the military (featured below) was a pleasant surprise.

I’m back, photos to come.

I finally make it up to Kentucky, after a detour into the ugly side of Chattanooga. Surprisingly there was very little Bonaroo traffic.