I took the camera phone with me on my ride today and came across this fallen tree. It’s had to tell from the photo, but this tree seems to have fallen for no apparent reason. 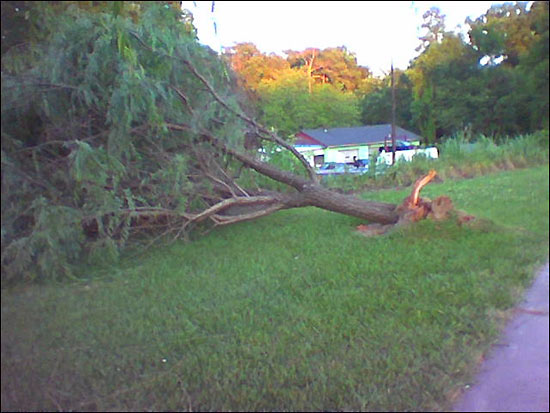 For about 2 months now a baby carriage has been in the middle of an empty field that is next to the bike path. The carriage seems to be in fine working order, and it has been sitting on it’s side on private property for some time now. Of course, the one time I bring the camera it’s gone.

Bad for the morning

Good for the morning

I was looking online for Gillian Welch appearances and encountered her on prairie Home Companion. Since her songs were spread through the whole show I listened to the whole show over the web.

While listening to his very good announcer voice I began getting a creepy vibe from all of it, particularly from Garrison Keilor, and after a while I realized why.

In about 1988 I was nearing the end of my comic book period and encountered the comic book miniseries V for Vendetta. The story takes place in a post-apocalyptic fascist Britain and is centered around a concentration camp escapee bent on revenge. One of the minor characters is the official spokesman for the government who got his start as an announcer/administrator at the concentration camp where the protagonist was interred.

It’s a vivid story and made a deep impression on me. For some reason Garrison Keilor deep, rich telling of bland stories and anecdotes reminded me of my conception of the announcer in the comic book.

I hadn’t thought of V for Vendetta in years…

Oddly enough, a quick google search tells me that V for Vendetta will soon be a movie.

UPDATE–corrected the spelling of “Keilor”.

I searched for Gillian Welch on Google, and discovered CMT bluegrass radio. CMT generally features the dregs of soccer mom country music and is generally best ignored. However, I now see they have a bluegrass station and I’m utterly blown away. It’s absolutely superb, both in audio quality and in selection.

Where I saw the lovely and talented combination of Bill Sheffield, Beth Casner, and Roger WhateverHisLastNameIs (featuring Ralph Lutrelle on Dobro) for a lovely evening of country blues. For some reason this cell photo turned out very grainy.

I saw this at Gates of Vienna under the heading “The Jihad That Refreshes”. Then I laughed hysterically. It basically takes the Coca Cola logo, flips it, changes it is non-obvious ways, to make the logo have an anti-Islam message. It’s a middle eastern version of the old Proctor & Gamble church of Satan hoax.

I finally got around to seeing Charlie Rose’s interview with Ariana Huffington. I was very underwhelmed. Somehow she missed the often expert nature of the commentary. Also she neglected to mention the speed that information is processed, but I guess one shouldn’t expect too much from a 15 minute interview.

Speaking of the Huffington Post, I read Jim Lampley’s current rambling of

Some esitmates for friendly fire casualties in Viet Nam exceeded forty percent. So what happened to Tillman, sadly, isn’t very surprising. Unfortunately, the implication that the Pentagon fudged the information to boost the heroism impact of Tillman’s sacrifice isn’t very surprising either. Tillman’s parents deserve bravery citations for telling the truth about their feelings.

Yesterday while at Borders I spent about 20 minutes flipping through a US News & World Report special issue about Islam. What I read was fairly informative. While I thought it neglected the conceptual differences between traditional Islamic notions of law and society and traditional Western notions, it was still a good read.

One thing that stuck me was the interviews with American Muslims (in describing themselves they used the phrase “Muslim-American” which annoys me intensely) was their descriptions of how 9-11 affected them. Granted I’m sure they interviewed dozens of people and they only chose a few, but they all had the same theme, largely that they were all self-consciously Muslim in their day to day life, whether in garb, associating with other Muslims, etc. One even went so far as to describe identification with a larger group as “uniquely American”. That also annoyed me intensely (this should be a country for individuals, groups are for the Balkans.). They were then surprised and offended when people began viewing them differently after 9-11. Put another way, they voluntarily profiled themselves before 9-11, but became offended when perception became negative.

There was also a section on Europe’s experience with Islam. The Theo van Gogh story is well known, but there was an article about Muslim immigrants not assimilating in Germany. The article also mentioned that the immigrant children are taught in Islamic schools. I don’t remember if the German taxpayers were on the hook for that or not. Not surprisingly this produces youth who have no interest in assimilating and I would imagine no economically viable skills, which is great if you’re trying to produce a permanent underclass, but beyond that it seem braindead. The slur mentioned in the title is “Pork Eaters” which is a derogatory term that the Muslim schoolchildren use for ethnic Germans.

I then come across this article in Reason

On April 30, American journalist Chris Crain became the victim of a hate crime in Amsterdam. While walking in the street holding hands with his partner, he was savagely beaten by seven men shouting antigay slurs. A few days later, Scott Long, director of the Lesbian, Gay, Bisexual, and Transgender Program at the Human Rights Watch, expressed some sympathy for the gay-bashers. Crain’s attackers were reportedly Moroccan immigrants.

“There’s still an extraordinary degree of racism in Dutch society,” Long opined to the gay news service PlanetOut. “Gays often become the victims of this when immigrants retaliate for the inequities that they have to suffer.”

Serap Cileli, a Turkish-German author and filmmaker who escaped an arranged marriage, told Der Spiegel that until recently, the German media refused to publish her accounts of her and other Turkish women’s experiences for fear of appearing “racist.”

Even feminists often balk at breaking the multicultural faith. A 2001 article in Labyrinth, a feminist philosophy journal, lamented that concerns about the oppression of women in the Third World could perpetuate “the stereotype that ‘brown’ men abuse ‘brown’ women more than white men” and cause “Third World” people to be perceived as “more barbaric” than Westerners.

Now beyond the implicit statistical errors in the above what does it say when everyone is so concerned about appearances and feelings over everything else. I’m reminded of the old Onion headline “ACLU defends Klan’s right to burn down ACLU headquarters”.

Nothing is stranger than reading the New York Times discuss NASCAR

For a certain segment of the population, Nascar’s raid on American culture — its logo festoons everything from cellphones to honey jars to post office walls to panties; race coverage, it can seem, has bumped everything else off television; and, most piercingly, Nascar dads now get to pick our presidents — triggers the kind of fearful trembling the citizens of Gaul felt as the Huns came thundering over the hills. To these people, stock-car racing represents all that’s unsavory about red-state America: fossil-fuel bingeing; lust for violence; racial segregation; run-away Republicanism; anti-intellectualism (how much brain matter is required to go fast and turn left, ad infinitum?); the corn-pone memes of God and guns and guts; crass corporatization; Toby Keith anthems; and, of course, exquisitely bad fashion sense. What’s more, they simply don’t get it. What’s the appeal of watching . . . traffic? It’s as if ”Hee Haw” reruns were dominating prime time, and the Republic was slapping its collective knee at Grandpa Jones’s ”What’s for supper?” routine. With Nascar’s recent purchase of a swath of real estate on Staten Island, where it intends to plop down an 80,000-seat racetrack and retail center for the untapped New York City market, the onslaught seems poised on the brink of full-out conquest. Cover your ears, blue America. The Huns are revving their engines.