I Tivo’d Speaking Freely on a whim and was amused to see that Charlie Daniels was the guest. I actually learned quite a bit.

Then it was on to Unfiltered with Tucker Carlson, which is rapidly becoming my favorite of the talking head shows. At first I was surprised when by the quality, since Crossfire was terrible. It opens with a monologue, then on to 2 rounds of interviews with experts of some kind. The absense of politicians reciting canned responses is quite rereshing.

Now, everything in me is revolted by the burning of books, let alone the attempt to murder writers, and I claim the right to feel this at least as strongly as any illiterate fanatic may choose to feel about a story in Newsweek. Some of us can be offended at insults to our culture, and we, too, possess unalterable convictions and principles. Many people take the same view of the desecration of Old Glory. But we would never dream of venting ourselves in random assaults on mosques or Muslims, and if anyone on our soil did dare to commit such atrocities, I hope and believe that they would not receive moist and sympathetic treatment in the pages of the American press.

Hitchens is one of the very few commentators that does not treat Muslims as exotic pets.

On a related note this CNN.com article was interesting for a few reasons, money grafs

Women in black veils marched through Kashmir, where schools and businesses were closed as part of the protest, and set American flags and copies of the U.S. Constitution ablaze.

“The defilement of our holy book is outrageous because we consider it to be the word of God,” thundered Asiya Andrabi, head of the women’s group Daughters of the Community, through her veil. “Guantanamo Bay is a cage. It is not a prison.”

I’m an INTJ, or “Mastermind” on Myers-Briggs Tests, specifically

INTJs are perfectionists, with a seemingly endless capacity for improving upon anything that takes their interest. What prevents them from becoming chronically bogged down in this pursuit of perfection is the pragmatism so characteristic of the type: INTJs apply (often ruthlessly) the criterion “Does it work?” to everything from their own research efforts to the prevailing social norms. This in turn produces an unusual independence of mind, freeing the INTJ from the constraints of authority, convention, or sentiment for its own sake.

INTJs are known as the “Systems Builders” of the types, perhaps in part because they possess the unusual trait combination of imagination and reliability. Whatever system an INTJ happens to be working on is for them the equivalent of a moral cause to an INFJ; both perfectionism and disregard for authority may come into play, as INTJs can be unsparing of both themselves and the others on the project. Anyone considered to be “slacking,” including superiors, will lose their respect — and will generally be made aware of this; INTJs have also been known to take it upon themselves to implement critical decisions without consulting their supervisors or co-workers. On the other hand, they do tend to be scrupulous and even-handed about recognizing the individual contributions that have gone into a project, and have a gift for seizing opportunities which others might not even notice.

Other masterminds include William F Buckley, Michael Dukakis, Donald Rumsfeld, CS Lewis, Colin Powell and Ayn Rand. Where they got that info I don’t know.

How about the rest of my many readers?

Bearing in mind the Pundit’s Fallacy, here they are:

For some reason I’ve been reading up on Judaism and Israel today. That led me to WikiPedia and then to the “Battle of Jenin“. The eye catching thing part (apart from the estimated death toll dropping from 3,000 to 56) was this:

Many Western news agencies reported these claims uncritically and without confirmation. However, on April 30, Kadoura Mousa Kadoura, the director of Yasser Arafat’s Fatah movement for the northern West Bank, dropped the death toll to 56 people, including armed combatants. Further investigation by the United Nations and international reporters found that only 52 Palestinians where killed in the operation, 22 of whom were civilians. [8] (http://news.bbc.co.uk/2/hi/middle_east/2165272.stm)

On May 2, Israel Defense Forces (IDF) filmed adult Palestinians carrying out a mock funeral procession. The funeral was fake and the “body” was able to get up and walk. On May 8th, 2002, The Palestinian Society for the Protection of Human Rights and the Environment (http://www.lawsociety.org) issued a press release [9] (http://www.lawsociety.org/Press/Preleases/2002/May/may8.html) stating that it was only Palestinian children playing “funeral”. Israeli groups reject this claim outright.

Anyone who’s talked to me for a while knows that I think self-selection is a powerful thing. It is illustrated very well in this Steven Landsburg column, Why Jews Don’t Farm.

So, what’s different about the Jews? First, Botticini and Eckstein explain why other groups didn’t leave the land. The temptation was certainly there: Skilled urban jobs have always paid better than farming, and that’s been true since the time of Christ. But those jobs require literacy, which requires educationÃ—and for hundreds of years, education was so expensive that it proved a poor investment despite those higher wages. (Botticini and Eckstein have data on ancient teachers’ salaries to back this up.) So, rational economic calculus dictated that pretty much everyone should have stayed on the farms.

But the Jews (like everyone else) were beholden not just to economic rationalism, but also to the dictates of their religion. And the Jewish religion, unique among religions of the early Middle Ages, imposed an obligation to be literate. To be a good Jew you had to read the Torah four times a week at services: twice on the Sabbath, and once every Monday and Thursday morning. And to be a good Jewish parent you had to educate your children so that they could do the same.

The literacy obligation had two effects. First, it meant that Jews were uniquely qualified to enter higher-paying urban occupations. Of course, anyone else who wanted to could have gone to school and become a moneylender, but school was so expensive that it made no sense. Jews, who had to go to school for religious reasons, naturally sought to earn at least some return on their investment. Only many centuries later did education start to make sense economically, and by then the Jews had become well established in banking, trade, and so forth.

I have no particular point with any of the above, I just wanted to get it online before I forgot about the article.

For the second time I’ve had to pull a stray chicken bone out of my dog’s throat. Who is doing this crap?

TechnicalVideoRental.com – where you can rent “How to” videos and DVDs, including quite a bit of the Homespun music catalog. HT: Marginal Revolution

Namely I learn it has a night setting. 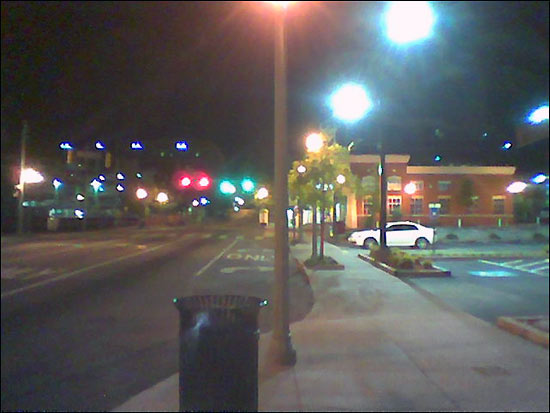 I came across this article on Instapundit. It’s a Reuters article about Italian authorities criminally charging an author for defaming Islam. For all practical purposes she would be tried for blasphemy. She’s rather old and living in the US and I doubt she’ll be extradited. Glenn ends with this quote

Tom Wolfe once said that Fascism is forever descending on the United States, but that somehow it always lands on Europe. Perhaps the same is true with theocracy?

Now mind you, she is being charged in Italy, not the US. If the Italians want to dig their own grave, so be it.

The cause (I think) is based upon vastly different underlying concepts; namely the West has moved the concepts of state, society and religion (and, for the properly educated, the economy) so far apart that Westerners’ really aren’t on the same page as those raised or educated in the Middle East or in the Middle Eastern way. What is a minor matter to us is a much larger thing to them and vice versa. Political Correctness and a permanent indignation industry don’t help either.

I do think it’s going to end badly. The cumulative effect of legal and other victories on behalf of Muslim sensibilities will effectively dehumanize Muslims in the eyes of the West and move them further out of the mainstream. By expending large amounts of effort on what seem to be trivial matters (based on the conceptual differences listed above), and maintaining group unity (which also seems to be happening) it will have the de facto effect of separating Muslims from the rest of society and giving them a high-maintenance reputation. Put in more mathematical terms it will raise the costs of interaction. The long run effect of all this is that the Western world treats Muslims as exotic pets and they never assimilate.

I wonder if there are any Ricardian Theories of cultural conflict? If not, this is the genesis of one I suppose.