Dan Habbot over at TDAXP has the single most informative article on the difference between Sunni and Shia Islam I’ve ever read.

Another terror plot is centered in London and Pakistan, as were the 7/7 plot.

I wonder if the prime focus of radical Islam is not the Arab word but Central Asia. Perhaps Arab culture, for good or ill, is too strongly ingrained to be replaced by a pure (messianic cult) version of Islam. The Central Asian states, might be more pliable due to 70 years of Soviet purges weakening the societies.

At the moment, it’s the politically correct West, and their treatment of Islam. I recently came across an ad for the movie Islam: What the West Needs to Know.

I read the site and found it irritating. The phrase “religion of peace” has been repeated often enough to be ridiculous, and it is a patently ludicrous assumption. But the opposite of a falsehood is not necessarily the truth, it’s usually another falsehood, as it is in this case.

Plainly put, saying a religion is a religion of peace is about as meaningful as saying the Norelco Bodygroom is an electric shaver of peace; it’s a term that doesn’t apply. Religions aren’t inherently anything, it’s all in the practice, and that varies with people location and time. If the practice at a given point in time and place is warlike or placid, then so be it. It’s a meaningless statement. It’s like imputing anti-semitism to vegetarians due to Hitler’s aversion to meat.

Over the past week the term “Prophet Mohammed” has come into existence. Weird. It used to just be Mohammed, with no title.

In related news, here is a fine editorial by Andrew Sullivan on the topic, and here is a post about the media as “a proper Victorian gentleman” which is well worth reading Also marginally related, Fareed Zakaria on the decline of Europe.

Andrew Sullivan remembers that South Park portrayed Mohammed in an episode a few years ago. And no on cared. What a scam this all is.

And Kudos to the Weekly Standard for publishing the photos. The gutlessness of the American press on this one has been quite sad. The article is well worth reading as well. Quick quote:

None of these anguished reactions actually occurred, of course–no pogroms, no renunciation of U.S. and E.U. aid, no hiccup in the Iranian nuclear program. Because there was no real “anguish.” In truth, by December nothing much had happened because of the cartoons.

So a group of Danish imams took off for the Middle East to try to cause trouble. To do this, they added three cartoons to their roadshow that they seem to have ginned up–crude propaganda pieces that would be guaranteed to stir a mob, just in case the original illustrations didn’t produce the effect they were after.

The militants’ trip was a success. Various extremist groups and terror-connected Islamists decided to use the cartoons as yet another weapon in the radical Islamist attempt to intimidate the West, and various Arab dictatorships saw a political opportunity in starting some anti-European riots.

And you can understand their calculation. Since 9/11, the West has gone on offense against radical Islamists and Middle Eastern dictatorships. That assault has apparently been more threatening to them than many of us realized. From Iraq to Palestine to Iran, from Islamist enemies of liberty to dictatorial opponents of democracy, those who are threatened by our effort to help liberalize and civilize the Middle East are fighting back with whatever weapons are at hand, and with whatever invented excuses and propaganda ploys they can discover. 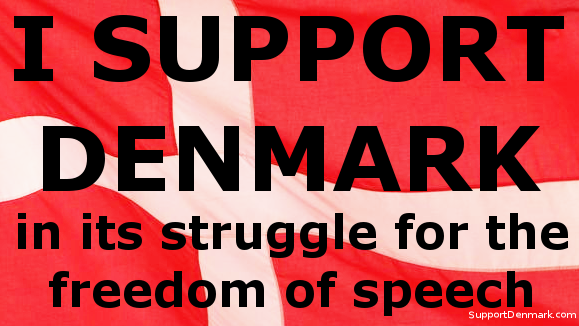 Everything that needs to written about the current green line conflict (to use hip internationalist jargon) in Denmark has been written. I suppose the underlying theme is the need for people to participate in a society to a strong degree.

It is a good display of spine by the Danes; I imagine we’ll see a lot more of this sort of thing in the future as multiculturalism wears thin for the Europeans, and diminishing marginal returns (as it becomes easier to move about that part of the world) on immigration.

Holland might ban the burqua. Here is a link to Georgia’s largely unenforced mask law, which would ban it here as well.